Nestlé’s dairy factory in Kabirwala, Pakistan, depends on the daily labour of hundreds of precarious workers provided by contractors on a no work, no pay basis. When the union became engaged in assisting long-serving precarious workers to obtain direct, permanent employment status – as prescribed by law – management responded with mass dismissals, provocations, police charges and physical assault by the labour contractor and goons.

Muhammad Saleem was employed as a contract worker in the filling and packing department at Nestlé Kabirwala since 2006. Below, he describes the precarious work regime at the factory, and what happened when the union supported the contract workers’ efforts to attain direct, permanent employment status in accordance with the law

“We were always given the same uniform as the Nestlé permanent workers, but when we filed cases for permanent employment management changed our uniform and said: ‘You are the contractor’s workers, so you need a different uniform.’

“We never had our own uniforms, we always shared them…”

“We never had our own uniforms, we always shared them. When we arrived at the factory we got a uniform from outgoing workers,  and when we finished our shift we handed over our uniform to incoming shift workers.

“It was the same with shoes; we got our shoes from outgoing workers and we handed them over to incoming workers. It wasn’t important that the shoes and the uniforms should fit and be comfortable. Sometimes workers suffered from skin irritations but it was never considered a serious issue either by workers or management; our priority was getting a days’ work. In peak season there was always a shortage of uniforms and in that case we got old, damaged uniforms.

“My father was already working at Nestle as a security guard through a security company and he introduced me in 2006. In 2010 when we filed cases in the court the management’s attitude changed and I was given cleaning work instead of packing. Management pressured my father, saying “If your son will not withdraw the case you will also lose your job.” For more than a month my father faced intimidation and pressure from management, and finally he was sent home. 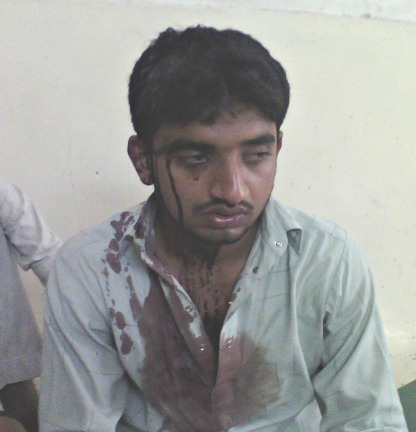 “After filing the legal cases it was difficult for us to get a day’s work. When management terminated 58 workers, we organized a protest rally. In response, management terminated 33 more workers on June 9. Our stay orders were confirmed by the labour court and management couldn’t legally terminate us – but they went ahead and did it!

“The next day, on June 10, we again organized a protest rally in front of the District Police Officer’s office in Khanewal. We finished our protest at noon and were coming back in groups. I was with two of my colleagues on a motorbike riding towards the factory. On the way, the contractor Iqbal Ramzan [one of the sons in Ramzon and Sons, who supply contract labour to Nestlé] and some 5-6 people stopped us and attacked us with sticks. We were injured; some of our colleagues took us to the hospital where we got first aid.

“The contractor lodged a police complaint against us before we even reached the station to file a report on the attack! This is probably why I wasn’t given a medical certificate at the hospital.

“The stay orders issued by the court are still valid, but Nestlé refuses to let us return to work.”