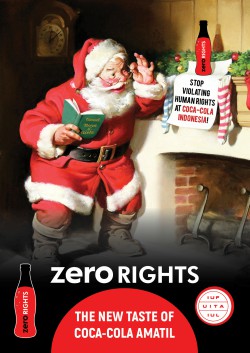 Coca-Cola’s famous Christmas Truck has already begun making the holiday rounds as people in many parts of the world gear up for their festive season. In some places, Coke offers a once-in-a-lifetime opportunity to spend a night in the truck! A cozy Christmas fireplace awaits the lucky guests…

Agile and alert to change, Coca-Cola Amatil came up with Zero Rights when workers at their Indonesian operations began to organize independent trade unions to challenge the oppressive workplace regime inherited from two decades of military dictatorship. Zero Rights was officially launched when newly-elected leaders of unions at two locations were terminated, members harassed and workers pressured to withdraw their signatures from a petition expressing their lack of confidence in the company’s preferred ‘union’ organization.

You don’t have to wait for the Zero Rights  truck to tell The Coca-Cola Company and Coca-Cola Amatil you don’t like their new taste. Thousands of people have already sent messages demanding respect for human rights at Coca-Cola Indonesia. If you haven’t done so, you can add your signature to the message by CLICKING HERE.

And you can visit www.tastezerorights.org for more information on the campaign. 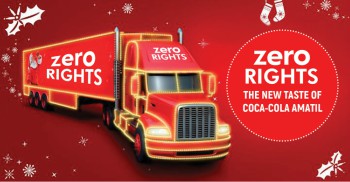