Home/News/Coca-Cola workers protest against closure of their factory in Lodz, Poland 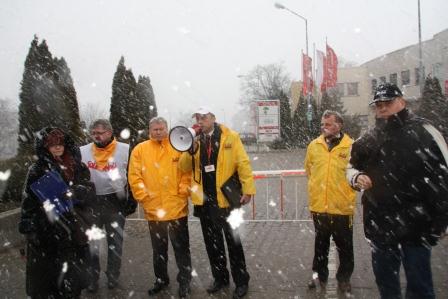 Despite heavy snow fall, about 100 protesters gathered in front of the Coca-Cola factory in Lodz January 13th to denounce management’s plans to close the factory in a sudden brutal move. Despite the bad weather conditions, some workers had brought their families and kids.

Less than five months before the EURO 2012 soccer championship, where Coca-Cola as a main sponsor is planning a huge marketing campaign, the announcement of the closure on January 5, threatening 165 workers with losing their jobs, had come as a hard blow to workers just after the Christmas holidays.

At the picket workers waved flags of their union, Solidarnosc, and held posters paraphrasing the EURO 2012 slogan “Together we create the future” by saying “Coca-Cola as a EURO sponsor: Together we create unemployment”. They shouted “We want to work”. A letter from the workers to General Manager A.Elafifi was handed in to management, demanding to withdraw the decision about the closure. 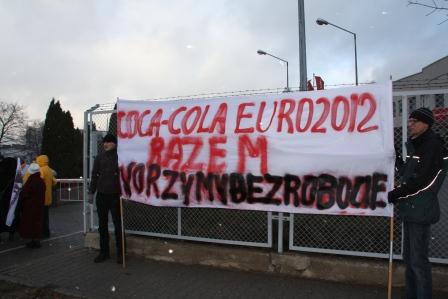 Solidarnosc regional chairman W.Krenc strongly criticized the company, which had refused to negotiate about possibilities to keep the workplaces in Lodz arguing that “labour cost was not the decisive factor”. Solidarnosc vice chairman Tadeusz Majchrowicz reassured workers of the solidarity of Solidarnosc at a national level and said Solidarnosc was ready to take further action should the company not move. Solidarnosc has said the company’s behaviour, shutting down factory for workers immediately after the announcement of closure had been made, reminded them of the introduction of the state of emergency in 1981, when workers were also blocked to enter factories. 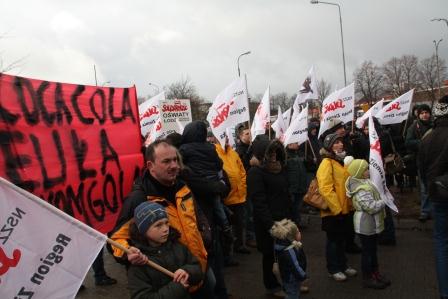 Teresa Kowalska, representing Solidarnosc’s fruit vegetable and soft drinks section, read out a solidarity message by IUF General Secretary Ron Oswald, saying “It is totally unacceptable that a company that’s making hundreds of millions of Euros of profit and considers itself ‘socially responsible’ would violate so blatantly all principles of good faith negotiations and just throw its workers out like the disposable bottles it produces. Coca-Cola Hellenic must reverse its decision. It must enter into serious negotiations with Solidarnosc about keeping the workplaces in production, warehouse and sales in Lodz. A management that is worthy of its name can surely find other solutions to turn around the operation.“

Solidarnosc plant level chairman Slawomir Maciaszczyk thanked all participants and called for continued protest in order to convince the company to keep the workplaces in Lodz. 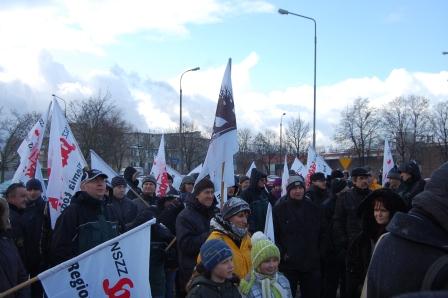