Tens of thousands of Colombians responded to the call for a national strike on March 17 by the country’s national trade union confederations, supported by a wide coalition of social movement and civil society organizations. Workers and citizens across the country stopped work and took to the streets to demand an end to neo-liberal government policies which have generated insecurity, unemployment and widespread hunger.

The movement’s demands, conveyed to President Santo on March 9, include defending small and medium agricultural production against the massive import surges unleashed by the Colombia-US Free Trade Agreement, halting the privatization of energy, health and transport, support for and investment in public education and pensions, an end to speculation, land grabbing and environmental destruction, measures to combat corruption and impunity and meaningful guarantees of democratic rights. 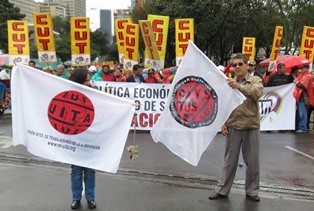 Full coverage, interviews and photos of the strike and the movement behind it are available (in Spanish) on the website of the IUF Latin American regional secretariat (click here) .