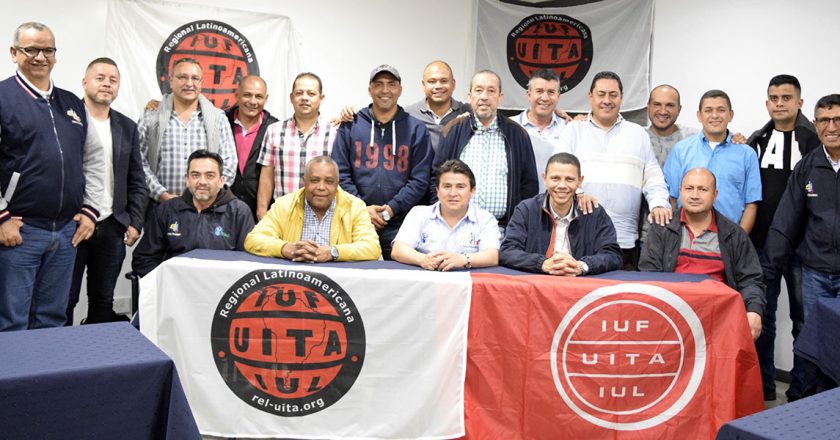 After a long conflict and the decision to go on strike, IUF-affiliated SINALTRAINBEC that represents workers at the Bavaria Company, a subsidiary of AB InBev, signed a new collective agreement on October 25. The IUF Latin America region spoke with Carlos Ortiz, national president of SINALTRAINBEC, about this successful struggle.

– How do you evaluate what has been achieved?

– It is important to highlight the reinstatement of 13 workers who had been laid off by the company. We also succeeded to get a salary increase of 1.8 percent above the inflation rate and we moved forward on many other issues all of which improve the living conditions of Bavaria workers and their families.

The Convention will be valid until August 31, 2021 and will be applied retroactively from September 1.

– What aspects of the convention would you highlight?

– With regard to health issues workers and their families will not pay fees for medical care, the conditions for the exercise of union activity are guaranteed and we improved the production bonuses that were already present in the previous agreement.

In total, we made progress on almost 20 items that were introduced in this new agreement whilst those already existing were improved.

– During this process you received various expressions of solidarity from the IUF-affiliated unions such as STIBYS and SITAC, which sent messages to the management of Bavaria.

– Yes and that was something excellent. The solidarity from the unions in Honduras, Brazil and Spain, supporting the workers in conflict in Colombia was very timely.

I want to thank the IUF Regional for all the support it has given us throughout, and the IUF Secretariat for organizing the International Brewery Workers’ Conference in Brussels, that was very important for us.

The accompaniment of the Regional Secretariat, for example through the regional website, was essential to spread our struggle and pressure the company.

And I do not want to forget the comrades who made up the negotiation team of UTIBAC and SINALTRAINBEC and the Unitary Central of Workers (CUT), the sub-directors of SINALTRAINBEC and especially the workers of the Cervecería del Valle, who courageously voted for strike action.

SINALTRAINBEC thanks SYNTEB in Togo, CC.OO. in Spain, SITAC in Brazil, STIBYS in Honduras, UNIFOR in Canada, Liberia Industrial Workers Union in Liberia, GMB in the UK, Tekgida-Is in Turkey, and IUF-JCC in Japan for their solidarity and support.

You can read the original Spanish news from the IUF Latin America region’s website: http://www.rel-uita.org/colombia/una-victoria-que-alienta/