Published: 01/10/2018
Workers and citizens of Costa Rica continue their mass mobilization and indefinite general strike launched by the unions on September 10 in opposition to proposed government measures backed by the IMF which would impose steep new, regressive taxes on consumption and services and roll back public sector wages, pensions and benefits negotiated through collective bargaining.

The unions have together proposed an alternative fiscal approach based on progressive income tax collection, a reduction of the proposed VAT, measures to combat fiscal evasion and protection for collective bargaining gains. The increasingly isolated government of Carlos Alvarado continues to reject negotiations without a prior return to work, a demand the unions have unanimously rejected. 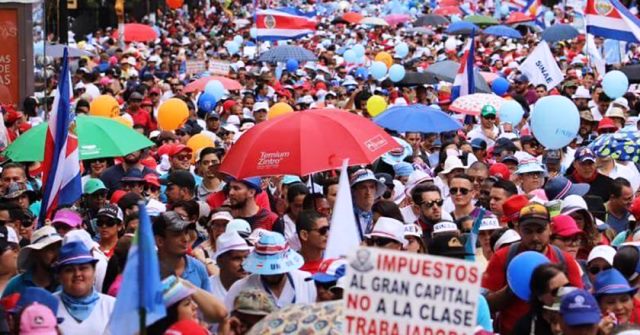 Despite police attacks on strikers and demonstrators, the strike continues with broad civil society support. Over a million workers and citizens demonstrated across the country on September 26 in a massive challenge to of oligarchic power and corruption.

Despite decades of solidarismo and anti-union repression, private sector unions have enthusiastically joined the strike (click here for an interview in Spanish with Maikol Hernandez, general secretary of the IUF-affiliated Fentragh, on the IUF Latin America website, which has given the movement extensive coverage).

The IUF Latin American regional secretariat has expressed its solidarity and support for the struggle and called on the Alvarado government to immediately and unconditionally enter into negotiations.