At its meeting in Geneva on May 15-16, the IUF Executive Committee unanimously accepted the International Domestic Workers’ Federation’s  (IDWF), request to become a special group within the IUF.

IDWF general secretary Elizabeth Tang thanked the IUF for its strong commitment and support over many years. It had been crucial for the development of the IDWN and the establishment of a global federation. Many IUF affiliates have a long history of organizing domestic workers and it was therefore natural to maintain and reinforce the links between the IDWF and IUF. 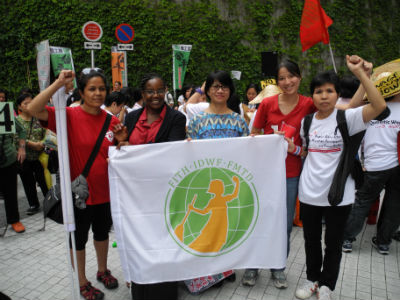 Since 2008, the IUF has provided an organizational basis for the international network of domestic workers, IDWN. It was only after the adoption of the Convention 189, that the IDWN could start developing its formal structures. That process culminated with the founding congress held in Montevideo, Uruguay, last October (see http://www.iuf.org/w/?q=node/2921).

The IDWF today has 48 affiliates in 40 countries around the world and an enormous potential membership. As a special group within the IUF, the IDWF can continue to build its organizing capacities and reinforce its members with the political support of the IUF and its regional structures.

The IDWF integration was warmly welcomed by the IUF Executive Committee and IUF General Secretary Ron Oswald said he felt humbled by the IDWF’s wish to be part of the IUF. “Domestic workers’ courageous and successful struggle for recognition of their rights is a source of inspiration not only for the IUF but for the labour movement worldwide”, he added.