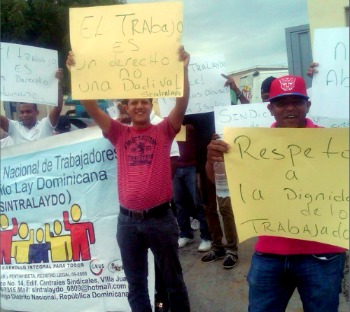 The annual report on the situation of human rights in the Dominican Republic, presented on 10th December 2014 in Santo Domingo by the National Human Rights Commission (CNDH-RD) stated that Frito Lay Dominicana SA (PepsiCo) had disrespected the right of freedom of association in 2014.

The CNDH-RD report noted concerns of serious setbacks in trade union rights in the Dominican Republic. The report also noted that major violations take place in the hotel and construction industries as these sectors usually employ undocumented Haitian workers whom hardly claim for violation of their rights.

The section referring to the right to work and freedom of association and economic, social, cultural and environmental rights noted Frito Lay Dominicana SA, owned by PepsiCo Inc. group, as one of the companies that have been disrespecting these rights.

“Throughout 2014, Frito Lay Dominicana, a subsidiary of PepsiCo US transnational, has retained the same anti-union policy of dismissals as a tool to prevent the Union of Workers of Frito Lay Dominicana (Sintralaydo) from reaching 50 percent union membership of total workers, the threshold that labor law in the Dominican Republic demands from unions to be able to engage in collective bargaining,” reads the report.

The CNDH-RD, which includes the International Federation for Human Rights (FIDH), explains that according to the data provided by the Sintralaydo, the company currently dismisses between 14 and 18 workers each month, and that in the last two years Frito Lay has laid off at least 260 workers, mostly union members.

The dismissed workers are immediately replaced by others who are intimidated and pressured into not joining the union. They also hire people close to a manager or head of department in order to easily influence the worker to not communicate with the union.

“This business policy has been causing serious economic and social problems for workers, and violates their labor, union and human rights,” say human rights organizations.