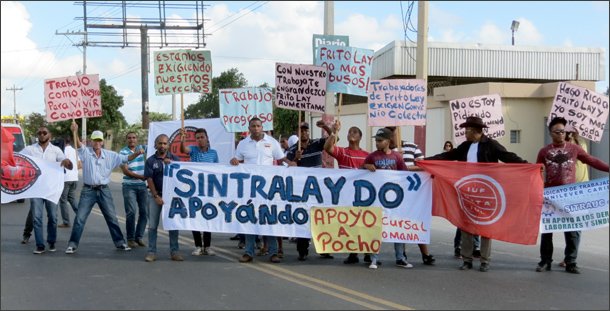 The Union of Workers of Frito Lay Dominicana (SINTRALAYDO) mobilized again, this time in the province of La Romana, southeast of the Caribbean island, to denounce the persistent campaign of layoffs at PepsiCo Dominican Republic. In just over a year, the U.S. transnational unfairly terminated 123 workers and union members and 2014 began with the same sweeping policy.

“We mobilized at the distribution center in Frito Lay Dominicana La Romana, in order to continue to denounce to the world that workers are no longer willing to tolerate this anti-union attitude and reject dismissals that continue to occur throughout the country. Through the dismissals, the company intends to prevent the union representing 50 percent of the workforce, the majority required by labor law to engage in collective bargaining, “said Alexander Mosquea, the General Secretary of SINTRALAYDO.

In the last 2 months PepsiCo dismissed 5 workers at the distribution center in La Romana, including Johana De Mota Ávila and Henry Guzmán whom were both active at union activities and close to assume leadership positions in the SINTRALAYDO.

“With the strong support of Barnabel Matos, IUF and Wilson Montero, the Union of Workers of Unilever Caribbean (SITRAUC), and the accompaniment of the National Union of Workers in Dominican Bepensa SA (Coca – Cola SINATRABEDSA), we stood against Frito Lay management in La Romana Dominican and demanded the immediate reinstatement of dismissed co-workers” said Mosquea.

Henry Guzmán told that the company made an excuse to fire him by accusing him of disrespect to a supervisor. “We will not stop the demonstrations and we have prepared a strategy to tone up the protest. Management is still trying to avoid sitting with us to negotiate a collective agreement to end abuses and arbitrariness.  Backed by our sister organizations and unconditional support we will continue denouncing PepsiCo, nationally and internationally, all these abuses, to ensure respect for workers` rights that are being violated with impunity, “said Mosquea.