Hotel workers held protests on June 27 and 30 outside the famous Dorchester hotels in Los Angeles (The Beverly Hills Hotel and Hotel Bel-Air), London (The Dorchester and 45 Park Lane), Geneva (Le Richemond), Paris (Le Meurice and Hôtel Plaza Athénée), Rome (Hotel Eden) and Milan (Hotel Principe di Savoia) over laws enacted by the hotel owner, the Sultan of Brunei, which violates the basic human rights of the citizens of his country.

The Sultan has imposed laws which could see women stoned to death for having an abortion and people could be publicly flogged, or have their limbs severed, or stoned to death, if they are identified as gay or lesbians; the law condones marital rape.

LGBT groups and celebrities have joined the worldwide concern expressed over the Sultan’s actions. 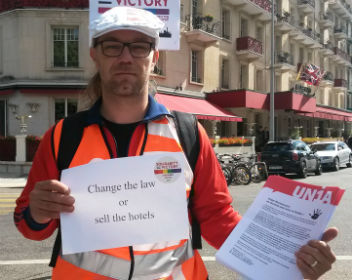