Together with several small farmers and peasant organizations, the IUF-affiliated Bangladesh Agricultural Farm Labour Federation (BAFLF) and National Women Farmers and Workers Association (NWFA) escalated the fight to stop the commercial release of genetically-engineered “golden rice”, following the announcement by the Minister of Agriculture that commercial growing will start “within three months”. 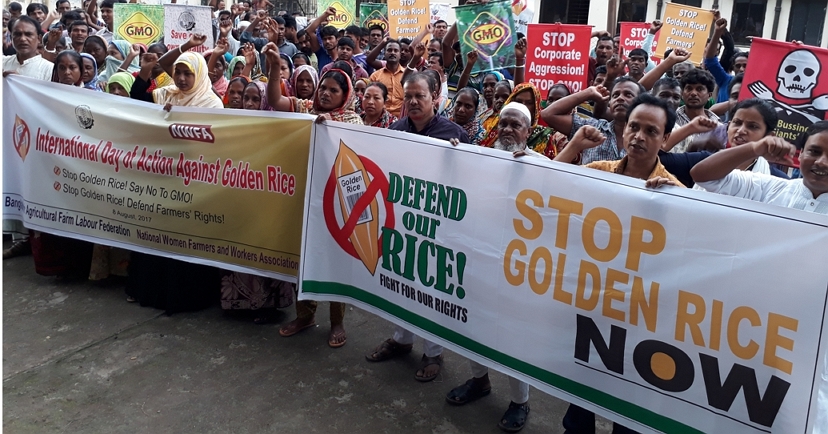 BAFLF and NWFA has called for an end to GM crop trials, a ban on Bt. Brinjal cultivation, restrictions on the import and use of harmful chemical pesticides, and a comprehensive review to strengthen the 2012 Bio-safety Rules. Corporate agribusiness has exploited Bangladesh’s weak bio-safety regulations to promote commercialization of GMO crops despite the threat to the environment, food security and public health. “Golden rice” has been widely rejected as a failed technology that poses significant risks. Despite this it is being dumped in Bangladesh. “Multinational companies are using Bangladesh as laboratory for GM crop experiments  and using people and farmers as guinea-pigs for their own interest,” said BAFLF General Secretary, Abdul Mazid. “This also poses a threat to farmers and farm workers’ livelihoods and employment.”