Published: 30/04/2014
The First Congress of the IUF-affiliated Agriculture and Farmers’ Federation of Myanmar (AFFM) denounced the serious threat to the livelihoods of small farmers and agricultural workers caused by land grabs

by government authorities, the military and corporations. Several farmers, including AFFM members, are imprisoned for attempting to return to their land. Where land is grabbed for industrial agriculture displaced farmers are often forced to return to their land as waged agricultural workers.
The Congress was held on April 29-30 in the Township of Waw in Bago Division and was attended by 1,152 delegates of which 35% were women. Over the past four years AFFM’s membership has grown to 51,890 members in 628 registered basic unions across the country.
Congress delegates adopted a comprehensive mandate on the right to food and a sustainable food system, including food security, access to water and water preservation, reducing exposure to hazardous chemicals, campaigning for the ratification of International Labour Convention No.184 on health and safety in agriculture, ending forced labour and child labour, promoting ethical investment in agriculture, and building collective bargaining power throughout the agricultural supply chains of companies and retailers to raise agricultural wages and secure decent livelihoods for farmers.
At the conclusion of the Congress a solidarity agreement on cooperation and support was signed between IUF Asia/Pacific and AFFM-IUF. 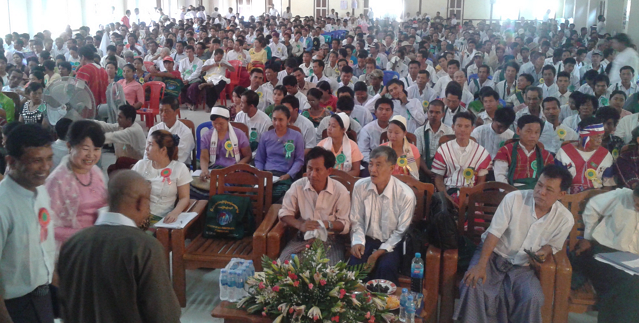