As part of its ongoing campaign for a living wage and secure jobs for fast food workers, the Respect Fast Food Workers’ Alliance (RESPECT) joined APL-Youth in organizing several activities in the lead-up to International Youth Day on August 12, focusing on the fight against precarious employment among young workers.

RESPECT, which is affiliated to IUF through the SENTRO Food & Beverage Workers’ Council, has combined its fast food organizing with community organizing by APL-Youth and a wider campaign for new laws to protect young workers.

For more than 10 years, a draft law vital to tackling the human rights abuses and economic injustices of precarious employment has been stuck in the Philippines Congress and the Senate despite the efforts of trade unions, including IUF-affiliated NUWHRAIN. The draft law on “security of tenure” will promote direct permanent employment and severely restrict outsourcing and casualization.

RESPECT and APL-Youth met with a Senator on August 10 to push for the passing of the draft law. They highlighted the growing phenomenon of “endo” (end of contract) as a crisis among young workers in the Philippines. Increasingly young workers are employed on contracts for only three to five months, and must constantly try to have their contracts renewed. This anxiety about the “end of contract” has not only creates massive insecurity, but in many cases prevents young workers from speaking out. In the case of fast food workers “endo” means they are unable to speak out against systematic wage theft (forced unpaid overtime) and abusive treatment by managers.

On August 12, RESPECT and APL-Youth organized community-based activities to raise awareness of the importance of the Security of Tenure Bill and intensify public pressure to have the bill passed into law. 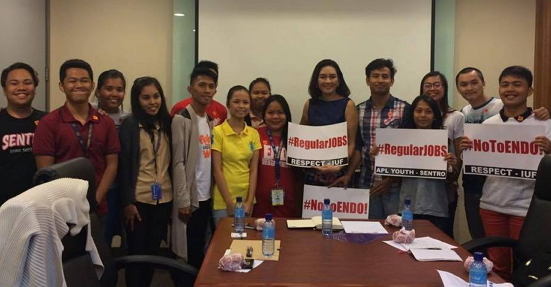