Published: 24/04/2017
Unite Union members at KFC, Starbucks, Carls Jr and Pizza Hut went on nationwide strike on April 22 to launch their campaign for a living wage. Workers voted overwhelmingly to take strike action against Restaurant Brands, the company which manages the four brands’ New Zealand operations, after negotiations for a new contract broke down over the company’s refusal to raise wages.

Restaurant Brands rejected a very modest proposal from the union for a rise of 10 cents an hour each year over three years above the minimum wage for the lowest paid workers. The union also wants increases for shift supervisors, skilled and experienced staff who are able to run restaurants, that will move them towards a living wage.

“The workers who actually make and sell their products have to go on strike to get a few cents above the minimum wage” said Unite National Secretary Gerard Hehir, “this is a stark example of the growing gap between rich and poor and Unite Union members at Restaurant Brands are taking action to close the gap a little bit” 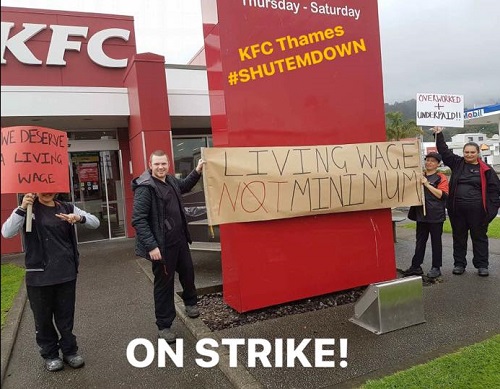