Negotiations for the renewal of the collective agreement at Inalca’s largest slaughterhouse in Castelvetro (Modena), Italy, broke down on 22 December 2009. On 14 January 2010, an overwhelming majority of Inalca workers – represented byIUF Italian affiliates FLAI-CGIL and UILA-UIL, voted in favour of a 16-hour strike that will start in the following weeks.

The stike is in protest at the company’s unwillingness to come to an agreement and at their poor proposals. The JBS-Inalca collective agreement for Castelvetro expired on 31 December 2008 and after 7 negotiating meetings management’s offer was rejected. “The company refuses to agree on collective measures and individual rights that are fully recognized by several other companies similar to JBS-Inalca” said both unions. Accepting the company position “would bring union-management relations back by ten years” they added. 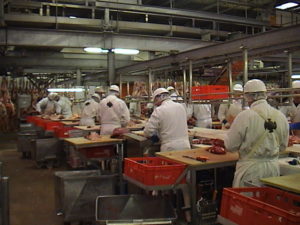 FLAI and UILA also denounce the poor offer for productivity premiums pointing that  “JBS-Inalca has basically dismissed the role of collective negotiations and agreements  as the key instrument to protect worker purchasing power and to enhance worker participation in corporate decision-making”.

Inalca operates another slaughterhouse in Lodi and 2 processing plants in Gazzoldo degli Ippoliti (Mantova) and in Valtellina. Deteriorating union-management relations also result from the abnormally high and systematic levels of third-party contracting of key phases of the slaughtering and processing operations. At the Castelvetro and Lodi slaughterhouses the majority of workers on the sites is not directly employed by Inalca but by external contractors working side-by-side with regular workers under precarious and much poorer employment terms in breach of the Italian national collective agreement for the agro-food sector. JBS-Inalca management has so far refused to deal with this situation that is creating a profound sense of injustice at the workplace.