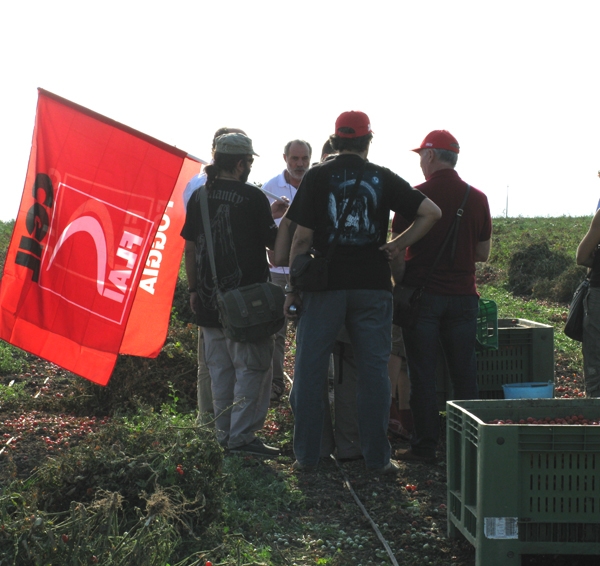 “The “Red Gold” Campaign brought important results” said FLAI-CGIL General Secretary Stefania Crogi. “Between August 2-12, 2009 the 80 FLAI-CGIL trade unionists gathered from all over Italy to take part in the Red Gold Campaign to organize tomato fields workers and to expose abuses in the agriculture sector traveled total 8,000 kilometers, met 5,000 workers, visited more than 150 tomato farms”. To read a previous article on this issue click here. These workers are now aware of their rights and know that they are not alone: they can join and go to the union for help. The Italian public opinion, local institutions and communities have been mobilized around this issue as never before.

FLAI-CGIL unionists witnessed and documented the appalling, lingering exploitation of several migrant tomato pickers working in illegal conditions, paid less than the minimum mandated by law in dangerous and unhealthy conditions, exhausted by huge daily harvest workloads and heavy lifting of tons of the precious crop.

Workers live in temporary camps among plastics and

carton sheds or empty warehouses, where access to potable water and proper sanitation is a luxury. They sleep in the fields or on concrete, use irrigation water to cook and mostly eat vegetables they find in the fields. The union activists listened the worker stories, gave out leaflets in 25 languages about legal pay rates, worker rights and invited them to become union members. Workers welcomed the distribution of FLAI-CGIL union hats that helped them to protect themselves from the burning sun.

Italian tomato is like gold, but its wealth is unequally shared. About 25,000 hectares of fields produce more than 20,000 tons of tomatoes that are mostly bought by processors that pay 9-10 € per hundred kilograms that benefit producers. “This wealth is however largely built on the exploitation of illegal immigrant workers and the breach of the national agriculture collective agreements” said Daniele Calamita, FLAI-CGIL General Secretary in Foggia.

“Workers earn on average 3€ per 300 kilos, whereas the legal rate mandated by the collective agreement is 46€. The producer earns 300€ per 300 kilos, 100 time what the worker earns. On average, they work from 6am to 10pm every day at temperatures that can reach 40C degrees”. This is the third year that the FLAI-CGIL office in the Italian southern region of Apuliae carries out such an initiative in tomato picking first and in grapes harvesting later in the season, but this is the first time the initiative involves FLAI-CGIL union officers nationwide.

“We decided  to do so to shed light and raise awareness on the harsh reality on the exploitation of agriculture workers in our country in general” said Ivana Galli from the FLAI-CGIL National Office.

Among the stories and practices documented by the union activists in the discussions with 15,000 workers it emerges that employment relations in the sector are extremely precarious, last few days and are then renewed intermittently. As a result, it is virtually impossible for workers to accumulate the minimum days of employment necessary to access unemployment insurance.

Recruitment practices go trough gangmasters, usually of the same nationality of the workers they employ, mostly from Eastern Europe, Northern and Central Africa. “From the 36€ they earn daily, workers have to take out expenses for transportation plus 2,5€ for lunch (a tuna tin and bread) and 50 cents to recharge mobile phones, paid to the gangmasters themselves. The responsibility of this intolerable situation ultimately rests on the employers” says Calamita.

FLAI-CGIL is pushing for the full traceability of quality and social standards of the Italian tomato, as well as for full implementation of the regional Italian law 28/2006 that was awarded by the EU the prize for best legal tool to fight submerged employment. The law includes – among others – a conditionally clause that subordinates the access to public national/EU subsidies by employers to the full implementation of labour rights and of the national agriculture agreement. A clause that is often not respected by tomato producers.

Following this year’s nation-wide initiative, FLAI –CGIL will now involve the local authorities of the tomato regions, NGO organizations and other allies to secure that workers who harvest Italian tomatoes have decent working conditions and a healthy place to stay.