Jacobs Douwe Egberts (JDE) workers in Utrecht, Netherlands and in 7 German locations (Bremen, Munich, Stuttgart, Berlin, Elmshorn, Leipzig and Darmstadt) took strike action on November 22. In Utrecht, workers successfully shut down production at JDE for 24 hours, the duration of the strike. NGG traveled with a group of striking German JDE workers to Utrecht to join some 200 FNV JDE strikers in a show of solidarity. The IUF Secretariat and IUF-EFFAT were also represented in Utrecht to give international support to this joint action.

Workers at JDE in Utrecht and in Joure (Netherlands), where FNV members held a 1-day strike on November 19, want a fair collective bargaining agreement. According to Niels Suijker of the FNV: ‘Last year Jacobs Douwe Egberts made a 431 million euro profit and the company continues to do very well. The company has presented its final offer and now refuses to listen to the response of its own employees. It’s take it or leave it. Dutch and German employees today are fighting together for fair collective agreements. That’s a strong message that JDE can and should not ignore.’

In Germany, JDE workers and their union the NGG are in a dispute over basic trade union rights. JDE has unilaterally terminated its agreement with the NGG and refuses to negotiate with the union, a violation of the OECD Guidelines for Multinational Enterprises. The company is instead attempting to reach agreements with the works council – which, according to German labour law, is illegal. 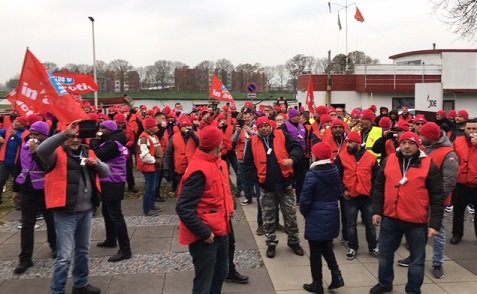