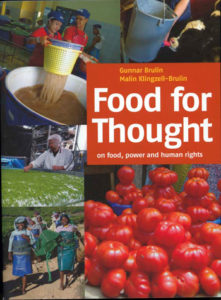 Malin Klingzell-Brulin and Gunnar Brulin, journalists for the Swedish Food Workers’ monthly Mål & Medel, have written a book we can recommend gladly, not only to trade unionists and workers within the global food system, but to all concerned with the most fundamental of human rights, namely the right to food. Food for Thought: on food, power and human rights, tackles a theme – power in the world food system, that has been written about from many points of view. But theirs is a virtually unique perspective, in two respects: First, because it looks at power in the food system from a point of view that should be at the center of discussion  and action, but “has been obscured in the debate,  namely: those who sow, harvest,  process, prepare and  serve the food we all need for our survival.” Second, the mechanisms of power – who controls what, and how, and with what impact on our lives – are explored through the eyes, and the actions, of food workers themselves as they organize to confront power through union action.

The authors describe a learning process, in which they themselves gain new insight into the workings of the global food system. They chronicle the struggles of IUF members around the world as they confront the power of the transnational corporations that increasingly determine what we eat, how it is produced and ultimately whether we will eat.

Foodworkers in Sweden learn the meaning of “leverage” when the frozen/prepared food company Findus (formerly part of Nestlé) is snapped up in a leveraged buyout by a private equity fund. A closer look at ‘fair trade’ starts with a visit to a unionized coffee-roasting plant. The reality behind ‘shareholder value’ is revealed, not through numbers, but through the lives of former Marabou workers who pay with their jobs for Kraft’s share price and executive bonuses following their company’s takeover. Poultry workers in Thailand learn the meaning of “export-driven growth” while struggling against repression and a brutal workplace regime while organizing a union. The impact of “free trade” is felt through interviews with food and agricultural workers in Ghana, crushed under a mass of cheap imports sanctioned by the WTO. The full impact of precarious work is driven home by way of the struggles of workers around the world against the destruction of permanent, direct employment at food giants like Nestlé and Unilever.

By focusing on the women and men who make up the IUF, tracing their struggles and letting them tell their stories, the authors touch on the fundamental levers of power which guide the global food system: the power of the line manager, the corporate boss, the stock market and finance, genetic patents, trade rules and control of land and water resources, forcing the reader to think through these issues. The authors’ strong commitment to internationalism and to the labour movement underlies their conviction that strengthening workers’ organization at every level, including the IUF, is fundamental to transforming the food system towards the satisfaction of human needs.