Home/News/From the Marriott US picket lines, solidarity with the fight for rights at Marriott Indonesia 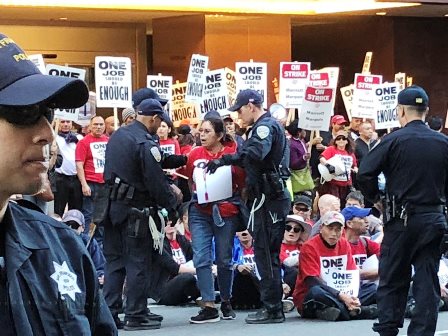 On September 5, UNITE HERE International President D. Taylor wrote the Marriott CEO in support of the IUF’s June proposal for discussions leading to an international agreement on global measures to protect workers at Marriott from sexual harassment on the job. Marriott had declined the IUF’s request, stating that the company saw no need to develop a new policy on sexual harassment.

In July, the IUF wrote to Marriott to ask the company’s response to the use of two of its hotels in Riyadh, Saudi Arabia in the 2017 round-up and detention of some 380 wealthy businessmen, who were held for at least three months and only released after paying out billions of dollars in assets. Reliable reports testified to physical abuse, torture and one related death. Guests were evacuated when the hotels were converted into detention centers, but the fate of the staff is unknown. Marriott’s only public acknowledgement that its hotels were serving as detention and extortion centers was a terse statement that the properties were “not being operated as traditional hotels for the time being.”

On September 28, the IUF’s European regional organization IUF-EFFAT wrote to Marriott CEO Sorenson to express concern over the refusal to engage with the IUF on a global policy to protect workers from sexual harassment, rights violations at Marriott Bali, the bargaining deadlock in the US and Marriott’s refusal to engage directly with the IUF’s Swiss affiliate Unia following the IUF’s exposure of the shocking exploitation of housekeepers at Marriott hotels in Zürich.