US-based company Phillips Seafood has reacted to the international campaign calling for the reinstatement of unfairly terminated workers and union recognition by introducing a new product in their factory in Lampung, Indonesia: a management-manufactured union. CLICK HERE TO SEND A MESSAGE TO PHILLIPS SEAFOOD!

Phillips Seafood then conducted a “union vote”, instructing workers to choose between the real union and the newly manufactured management union. Two local labour department officers were brought in to make the proceedings look official.

When FSBL intervened the provincial labour department confirmed that the verification was unlawful because a private company cannot conduct a union vote without oversight. The role of the two labour department officials, and Phillips Seafood’s role in the arrangement, is now under investigation.

The IUF and FSBL renewed their calls for the immediate reinstatement of 205 unfairly terminated workers and recognition of the union. “Phillips Seafood should stick to making canned crab meat and stop making fake unions, ” said Eko Sumaryono, General Secretary of FSBL. “The workers already have a union.  What they need is for Phillips Seafood to respect their human rights by recognizing the union and enter into collective bargaining.”

CLICK HERE TO SEND A MESSAGE TO PHILLIPS SEAFOOD! 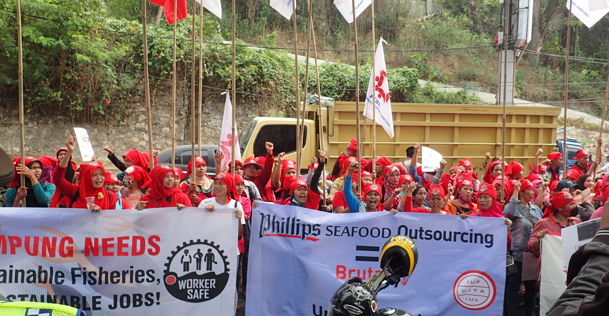