Published: 20/01/2015
Leaders of Hong Kong’s independent trade union confederation HKCTU now face criminal prosecution for supporting the democracy movement. HKCTU general secretary Lee Cheuk-yan was formally questioned by police on January 17 and accused of inciting, convening and participating in unauthorized assemblies. He was released without bail after being told that police reserved the right to prosecute at any time. HKCTU chief executive Mung Siu-tat has been called for questioning by police on January 22.

The union was in the forefront of the democracy movement from the beginning, and now faces reprisals and repression. HKCTU leaders and activists were arrested but released without charges on December 11 when police moved to break up the last of the democracy encampments. “Inciting” illegal assemblies is a serious charge with potentially stiff prison terms. 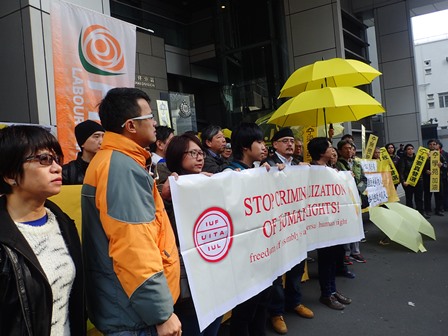 Union members and supporters rallying outside the police station were joined by IUF Asia-Pacific Regional Secretary Hidayat Greenfield, who condemned the government’s efforts to criminalize and intimidate democratic protest and pledged ongoing IUF support. Lee told the rally that the independent labour movement would not yield to pressure from the central government and the Hong Kong administration to abandon the struggle for democracy.