Published: 01/11/2017
On October 28 and 29, the Hong Kong Confederation of Trade Unions (HKCTU), labour groups, pro-democratic political parties, community organizations and students held protest actions to mark the 20th anniversary of the repeal of laws that briefly guaranteed the right to collective bargaining in Hong Kong.

Just prior to the handover of Hong Kong to mainland China in 1997, legislators representing the independent, democratic labour movement managed to gain support to pass laws guaranteeing the right to collective bargaining for the first time. Immediately after the handover – just two weeks later – the laws were struck down. Since then workers in Hong Kong have been denied the right to bargain collectively.

IUF joined the protest actions together with members in the food and beverage and hotel and tourism industries in Hong Kong. “With such extreme poverty and inequality in Hong Kong, collective bargaining rights as a universal human right are needed more than ever as the only means through which workers can lift themselves and their families out of poverty,” said IUF Asia/Pacific Regional Secretary Hidayat Greenfield. 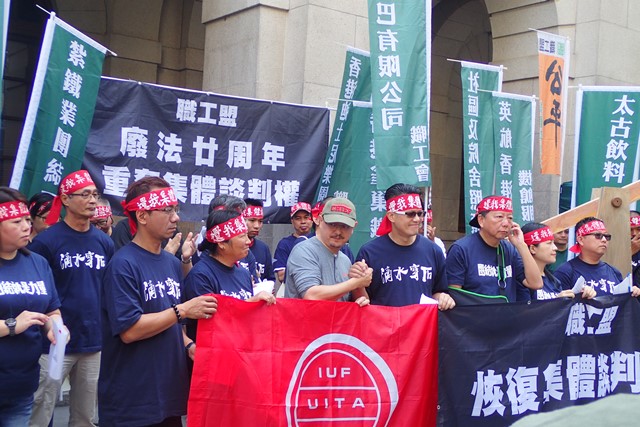