Home/News/Hotel housekeepers stand up around the world for rights, recognition and safe work in Global Action Week 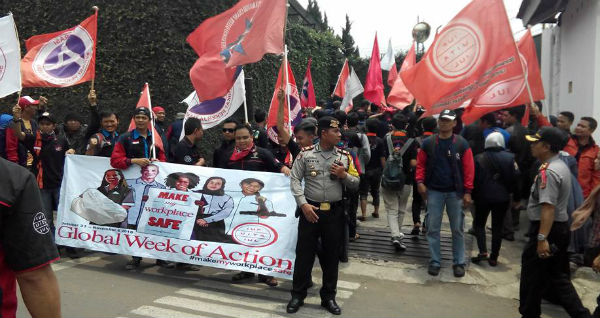 Demonstration organized by FSPM in Bandung, Indonesia, on November 2nd

Hotel housekeepers and their unions in 34 countries and over 50 cities around the world held a variety of actions to highlight their fight for rights, recognition and better working conditions during the IUF’s 3rd Hotel Housekeepers Global Week of Action from October 31 to November 6. Many of the actions this year highlighted the central importance of preventing sexual harassment on the job, a constant threat with which housekeepers have to contend. The varied actions included workshops and seminars with experts and awareness-raising meetings with workers, management and the public, including leafletting at airports. Unions also called for specific language in collective agreements on protecting workers from sexual harassment.

Everywhere, unions demanded improved working conditions, greater job security and more respect for housekeepers at the workplace. Unions also made use of the Global Week of Action to show to workers the important results of the ongoing campaign in bringing about concrete improvements in working conditions and as an organizing tool for building bargaining power in hotels.

You can see photos from the many actions on Flickr and on the “Make My Workplace Safe” Facebook page.