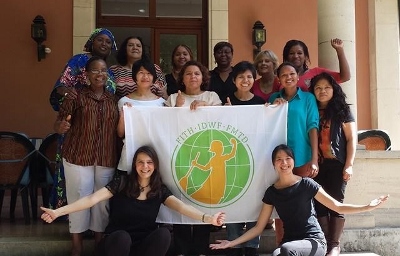 The Executive Committee of the International Domestic Workers’ Federation, IDWF, held its first meeting following their founding Congress on June 11 at the IUF secretariat in Geneva.

The meeting was preceded by a planning workshop with EC members and the regional coordinators. Some of the IDWF representatives participated in the ILO discussions on “Transitioning from the informal to the formal Economy” and “Strengthening action to end forced labour” respectively.

The IDWF EC expressed its solidarity with the Women’s Committee of the Agro-industrial workers union in Ukraine in its continued struggle for women workers’ rights and a democratic and peaceful development in the country. Read the full statement here.

IDWF also addressed a letter to the Emir of Qatar requesting that all migrant domestic workers in Qatar should be freed from the “Kafala system” through which employer abuses of domestic workers’ rights are clearly linked. Read the full letter here.