Independent unions at Coca-Cola Indonesia, joined by IUF affiliates and other Coca-Cola unions, rallied in front of the Coca-Cola Amatil Indonesia head office on May 8 in defense of the fundamental rights the company continues to systematically violate.

Workers and their unions are demanding the reinstatement of SBCCD chairman Atra Narwanto (terminated last year) and protesting the suspension pending termination of SBMCC chairman Lutfi Arifiyanto in March 2017, only weeks after the union was officially registered. The unions are also demanding collective bargaining negotiations on payment systems and working arrangements, negotiations which the company continues to reject on the grounds that wage scales are a ‘confidential’ business secret.

Management refused to meet the protestors’ demand for a meeting with the union to discuss the long-running conflict. CLICK HERE TO SEND A MESSAGE TO COCA-COLA! 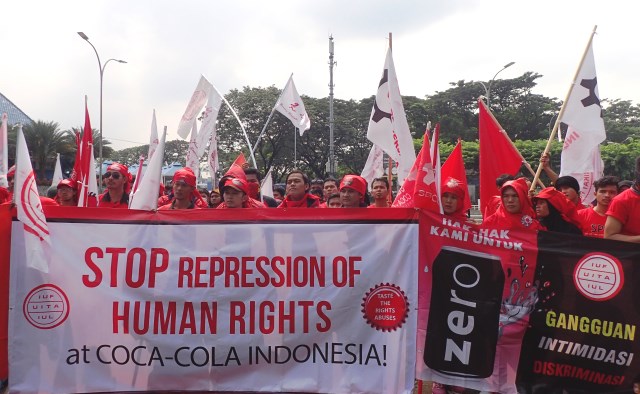