In Bihar, one of the most impoverished states in India, the IUF-affiliated Hind Khet Mazdoor Panchayat (HKMP), a union of agricultural and plantation workers, is promoting greater awareness and access to the Mahatma Gandhi National Rural Employment Guarantee Act (MGNREGA) in response to climate change. Extreme weather has devastated crops and cut short planting and harvesting seasons in recent years, resulting in greater insecurity, unemployment and debt.  As a result, climate migration out of Bihar is on the rise and workers are exploited as vulnerable migrant workers in low-paid jobs in other states. There is also increased exposure to the risk of trafficking.

Through its campaign on the right of agricultural workers to access MGNREGA, HKMP is seeking guaranteed work and income that will help members and their families in the increasingly longer off-season, keeping them out of poverty and debt. At the same time, the construction projects that create paid employment under MGNREGA  are decided at village level, providing an opportunity for climate change mitigation. This includes water harvesting, wells, canals, planting trees, protection against soil erosion, and restoration of arable land. The first step for HKMP is to organize workers in their communities to access their rights under MGNREGA and to play an active role in decision-making at village level on infrastructure projects that respond effectively to climate change while supporting livelihoods. The campaign was launched in Bihar following the action plan that came out of the IUF South Asia Land & Freedom meeting in Kathmandu in November last year. 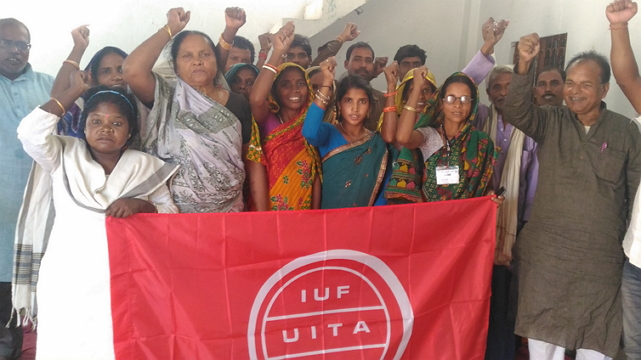