In 2012 India will displace the US as the world’s third largest beef exporter, with exports growing by 16% to exceed 1.3 million tonnes per year. This follows government efforts to bring about a “pink revolution” in the meat and poultry industry (following the so-called “green revolution” in agricultural crops and the “white revolution” in dairy).

But behind the “pink revolution” are hundreds of thousands of precarious workers (some estimates put the number at over a million) who are denied basic rights, including legal entitlements to health insurance, social security, sick leave, weekly rest days, as well as being forced to work without protective clothing.

There are only 15 modern abattoir and 171 semi-integrated meat processing plants in India, with production driven mainly by the 3,900 municipal slaughterhouses operated by local governments throughout the country. These slaughterhouses are operated by Municipal Corporations (a local government body that administers a city with a population of 200,000 or more) that employ workers on a permanent basis as municipal sector employees. But the the Municipal Corporation also leases or auctions ‘space’ to private meat traders who employ casual workers on piece-rate wages to produce meat for export. This is the driving force behind the world’s third largest beef exporter.

The abattoir operated by the Municipal Corporation of Mumbai City employs over 600 permanent workers who are unionized and negotiate collective agreements with the Municipal Corporation. But another 700 casual workers working in the abattoir full time for 364 days a year (only one day in the entire year – October 2 – is granted as a holiday) are denied the same rights and benefits of permanent workers.

While the Municipal Corporation owns and manages the abattoir, the section of the abattoir where casual workers are employed is auctioned off to private traders. The meat export merchant who wins the auction each year has the sole use of the abattoir, bringing in cattle for slaughter and paying the 700 casual workers piece-rate wages. This cuts off any employment relationship between the precarious slaughterhouse workers and the Municipal Corporation, effectively severing any responsibility.

Two decades ago the precarious meat workers at the Municipal Abattoir in Mumbai were entitled to Fridays as their weekly day-off, but that was abolished and they now work 7 days a week.

As well as being denied their legal right to a weekly rest day, they are denied social security, medical insurance and paid sick leave. The meat export merchant leasing the abattoir provides no boots, aprons, masks, or gloves or any other equipment. The workers work with bare hands and in sandals or barefoot. Unlike the municipal workers’ section of the slaughterhouse, in the ‘privatized’ zone there are no washing facilities or even drinking water. Only after the precarious slaughterhouse workers joined the Mumbai-based Sarva Shramik Sangh (General Workers’ Union) were they able to win access to potable drinking water at the abattoir.

In 2007 Sarva Shramik Sangh started organizing health camps in the neighbourhoods around the abattoir where volunteer community doctors provided slaughterhouse workers with medical check-ups and free essential treatment. Workers joined the union and continued to fight for their rights.

This fight extends to rights beyond the workplace. The compulsion of low piece-rate wages means long working hours, with most workers finishing at 3 or 4 o’clock in the morning. Carrying their own knives used for slaughtering and cutting (since no tools are provided at 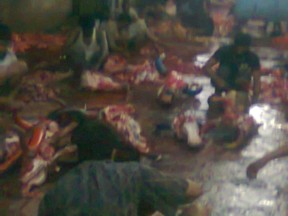 the Municipal abattoir), workers are regularly harassed by the police when returning home. Meat workers protested against being treated as criminals and in November 2011, Sarva Shramik Sangh launched a public demontration in Mumbai calling for an end to police harassment.

In organizing and campaigning Sarva Shramik Sangh bypasses the private merchant and targets workers’ demands at the municipal authorities in Mumbai who are ultimately responsible for working conditions in the abattoir. Through this approach the union recently won the right of workers to be enrolled in the government insurance scheme for the first time.