Published: 27/11/2018
Members of the independent union at Coca-Cola in Bandung took their fight for rights to the company’s national office in Jakarta on November 19 following a week-long collective refusal by victimized workers to leave the factory. The five workers who were dismissed on November 12 after rejecting a ‘voluntary’ retrenchment scheme targeting union members only left the plant and travelled to Jakarta in a union caravan organized by the independent foodworkers’ federation FSBMM. The caravan joined other workers in a vigorous protest action at Coca-Cola Amatil’s Indonesia head office in Cilandak, Jakarta. 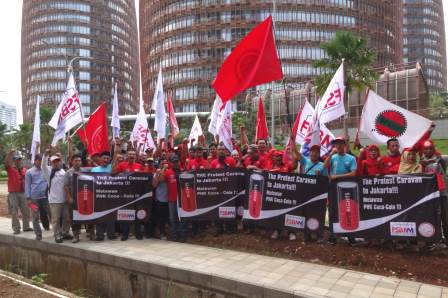 On their return to Bandung, the victimized union members, who have not signed their termination letters, were refused entry to their workplace.

FSBMM and the IUF will continue to organize solidarity and support to the victimized union leaders and members of the independent Coca-Cola workers union at Bandung (SPMCC) and across Indonesia.