Dismissed workers from the 5-star Bandung Grand Aquila Hotel have walked nearly 250 kilometers to seek a meeting with the president of Indonesia, and are still waiting to hear if the country’s leader is prepared to enforce Indonesia’s legislation which makes union-busting a criminal offense.

In October 2008, a local affiliate of the IUF’s hotel federation FSPM informed management that a union had been formed at the hotel. The hotel General Manager called the union’s nine officers into his office in groups and dismissed them on the spot – without so much as a dismissal letter. Since then, 137 union members have been dismissed.

The union fought back with, among other means, a police complaint charging the hotel with violation of the Law to Protect Freedom of Association. This law, promulgated in 2000 after Indonesia ratified ILO Convention 87, makes it a criminal offense for an employer to punish workers for attempting to exercise their right to freedom of association. An employer found guilty can be sentenced to up to five years in prison and/or a fined up to USD 50,000. Needless to say, the law has rarely been enforced.

In response to pressure from the union, which also held regular mass protests at the hotel, the police eventually launched a criminal investigation, but last July declined to pursue the case for alleged lack of evidence!

On April 1, the Hotel Grand Aquila Independent Workers Union (SPMHGAB) wrote Indonesian President Susilo Bambang Yudhoyono of their intention to walk from Bandung to the presidential palace in Jakarta to seek an interview. Five dismissed union officers set out on April 5, and on April 12 reached Jakarta. Along the way, they received support from FSPM affiliates and other unions who gave them lodging in their union offices. Joined by other unions on arrival in Jakarta, they held a rally at the Bunderan Hotel Indonesia and marched to the presidential palace. 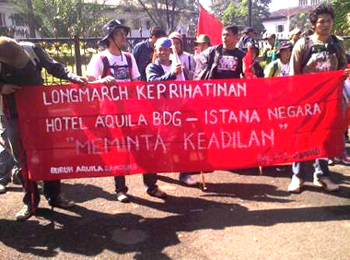 To date, the president has shown no indication that he is willing to meet. The government of Indonesia has so far refused to respond to the IUF’s complaint against it over this case lodged last year with the ILO’s Committee on Freedom of Association. The workers continue to hold daily protests, and unions from Jakarta and beyond have pledged to rally in their support on May 1.

Grand Aquila has been union-busting with impunity and the government refuses to enforce its own legislation. The union’s demands are simple and just: reinstate all dismissed workers immediately and unconditionally with full  back pay, and respect trade union rights at the Grand Aquila.

These courageous workers should not have to walk nearly 200 kilometers only to be snubbed. You can support their struggle by sending a message to  the President and government of Indonesia, urging them to meet,  to listen and to act in defense of basic justice and their own laws!