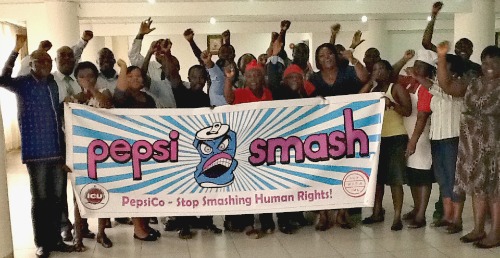 The deputy General Secretary of ICU addressed the union members and asked them to support the ongoing struggle of 28 dismissed PepsiCo warehouse workers and the IUF by signing the postcards calling on PepsiCo and its CEO, Indra Nooyi, to remedy abuses in India through talks with the IUF.  He also invited ICU members to visit the IUF website to send a solidarity message to the PepsiCo (Frito-Lays) Workers Action Committee in India.

IUF TNC coordinator for North Africa, Simeon DOSSOU and the IUF women project coordinator for Africa region, ADWOA Sacki, explained more about the issues in India and distributed the leaflets and the postcards that are prepared in support of Indian workers to ICU members. Post cards were signed by PepsiCo workers and sent to Indra Nooyi by the union.