Unions took action at the annual Seafood Expo Global in Brussels, Belgium from April 26-28 to highlight the brutal practices which are widespread within the industry and to defend the rights of seafood industry workers. Seafood Expo Global is the largest international trading platform for fish and sea food.

In 2015 the international federations IUF and ITF, their European regional organizations EFFAT and ETF and their Belgian affiliates organized action at the Expo gates in support of dismissed union members at the Citra Mina (Philfresh) company in General Santos, Philippines. This year the action expanded to include union representatives from Belgium, Denmark, Italy, Norway and the UK who travelled to Brussels to talk with the companies violating workers’ rights, including Doha/Aveiro of Morocco in addition to Citra Mina/Philfresh, and deliver a union letter to the Icelandic Group. 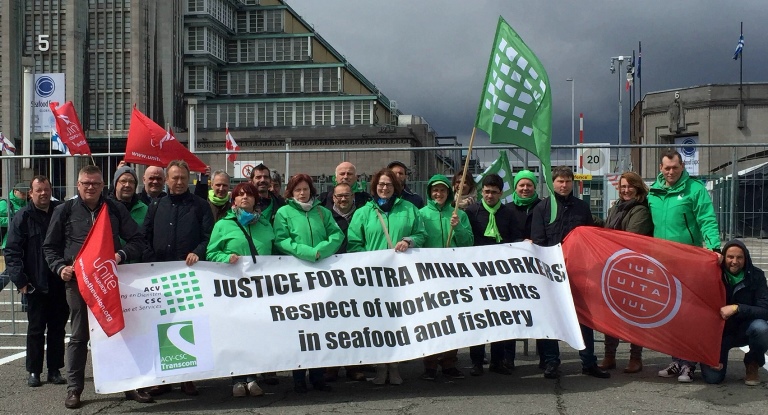 Union activists held a picket at the gates and distributed leaflets to raise awareness of the ongoing human rights abuses in the industry.

On April 26, a delegation from IUF/EFFAT and ITF/ETF met with the European Commission to stress the urgent need for company-specific mechanisms in EU law to ensure that companies that export their products to the European Union respect fundamental human rights including the right of workers to form trade unions and to negotiate their conditions of employment.