The IUF and our regional European organization EFFAT-IUF have joined with the IUF-affiliated SEIU in the USA and Canada and the Brazilian national trade union center UGT to demand action to address sexual harassment at McDonald’s restaurants around the world.

The unions have filed a joint complaint with the National Contact Point in the Netherlands responsible for observance of the OECD Guidelines for Multinational Enterprises. McDonald’s entities based in the Netherlands exercise a pivotal role in the company’s Europe-wide operations. The complaint also cites two major financial investors with $1.7 billion in holdings in McDonald’s – APG Asset Management in the Netherlands and Norges Bank in Norway, the latter the eighth largest investor in the burger giant. Under the Guidelines human rights due diligence requirements, these major investors should have been alert to the problem of sexual harassment and taken appropriate action.

The complaint details failures by McDonald’s global management to address rampant sexual harassment and gender-based violence at its restaurants in Australia, Brazil, Chile, Colombia, France, the United Kingdom and the United States, among other countries. 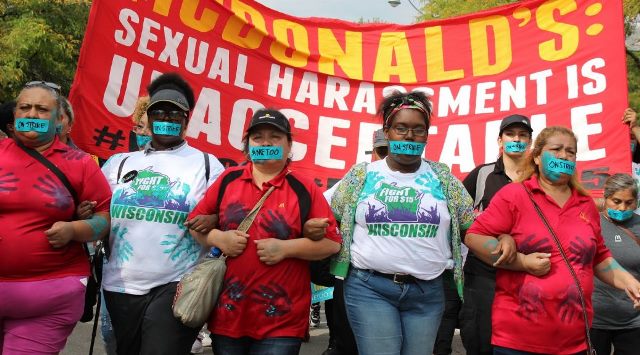 “McDonald’s workers have sounded the alarm about sexual harassment and gender-based violence for years, but the company has failed to take meaningful action to address the problem,” said IUF General Secretary Sue Longley at a May 18 press conference to announce the complaint. “The Dutch government should make use of this complaint to empower workers to effectively address the rampant harassment they face under the Golden Arches.”