Following a four-month fight for their right to be members of the IUF-affiliated TEKGIDA-Is, 400 dairy workers at the Yörsan Dairy Company in Susurluk-Balikesir, Turkey are asking for your support. Yörsan exports finished products to the USA, Europe and the Middle East under the Yörsan brand, as well as furnishing Japan Air Lines with cheese, yoghurt and pomegranate juice for catering.

The employer’s brutal attack on workers’ basic trade union rights rights has included physical threats and massive intimidation. One TEKGIDA-Is member, Mehmet Karaman, was taken by force to a house in a vineyard and threatened with being shot in the foot if he did not resign from the union. When threats of violence failed to pressure the workers to renounce their right to join the union and have it bargain on their behalf, the company dismissed all 400 union members. The dismissals started on December 5, when 12 workers were dismissed, growing to 110 on December 7 and 240 the following day. All 400 union workers had been dismissed by December 9.

The employer also attacked the union and fundamental trade union rights in two major national newspapers claiming that peace at work was being ruined by “some people’s negative activities”. For management at Yörsan Dairy Company, the exercise of human rights clearly constitutes “negative activity”! Before the workers moved to try to join the union, Yörsan had a policy of systematically using “trainees” in place of permanent workers – a clear violation of Turkish labour law.

The union and the IUF have condemned this attitude and the repressive actions of the Yörsan management. TEKIGDA-Is has made every effort to reach a fair settlement on the basis of Turkish labour law and legal procedures, so far without results. The IUF therefore calls on its members and supporters to send messages directly to the company in support of these 400 courageous workers. Tell Yörsan Dairy Company to respect fundamental rights at the workplace! 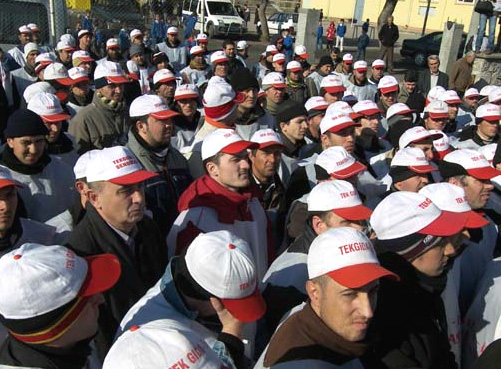 Workers show undiminished support for their union at Yörsan dairy, where management has sacked all 400 union workers in a brutal attack on trade union rights.