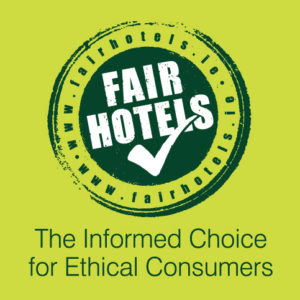 SIPTU, the union for hotel workers in Ireland has launched a campaign to support hotels which hotels which treat workers fairly and promote quality jobs in the industry Over 40 hotels across Ireland where workers have collective bargaining rights have signed up to the campaign, encouraging union members and consumers who care about workers rights to use these hotels.

The IUF is supporting the campaign, and attended the launch in Dublin where hotel workers, employers, and NGO representatives as well as the Irish Congress of Trade unions (ICTU) spoke about the need to create an ethical choice for hotel customers.

The campaign will use the combined purchasing power of 850,000 workers in Ireland, alongside the institutional purchasing power of 50 Irish trade unions, which between 2010 and 2013 will hold 61 conferences requring 44,390 bed nights for 17,650 delegates across the country.

The campaign is also endorsed by 32 Irish NGO and civic organisations, including Fair Trade Ireland. Unions from around the world have also signed up to support the initiative.

A number of other IUF affiliates have also produced lists of recommended (or not-recommended) hotels, restaurants and tourism businesses based on whether they respect freedom of association and collective bargaining rights. These include:

www.schystavillkor.se – An initiative of the HRF in Sweden, this site allows you to search for all hotels, restuarants and other leisure facilities (such as Bingo Halls) which are part of the national collective agreement. You can search the site by business name, type or location.

www.thefirststar.com.au –This website of the LHMU in Australia provides extensive details of the working conditions in luxury hotels, including where there are ongoing labour disputes.

http://www.fairhotel.org/– This is the union hotel guide of Unite Here!, the Hotel union for North America and Canada. You can search the site by hotel name or city. It provides a list of hotels to patronise, and to boycott.