Published: 04/08/2017
Paolo, a 29-year old experienced waiter from Milan who was born in Brazil, responded to an ad for summer work and applied for a seasonal job at a hotel in Cervia, on the Italian Adriatic coast.  An agreement was reached by phone. But on June 18 Paolo sent the hotel a copy of his ID card needed to formalize employment. He received back a text message saying: “I’m sorry Paolo, I can’t hire you. You’re black. People here wouldn’t understand.” 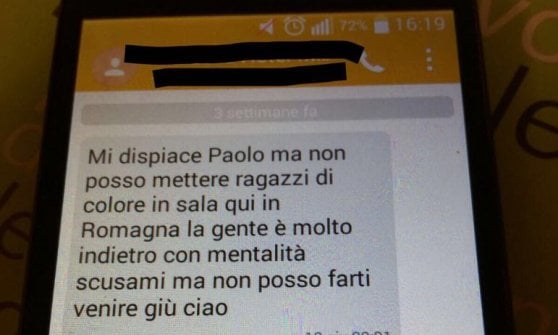 Picture of the text message received by Paolo

Shortly after, he contacted the local branch of the IUF-affiliate Filcams Cgil which filed a legal action for racial discrimination against the hotel.

“We face a clear case of racial discrimination,” said Filcams-Cgil, “in which the loss of earnings for the season job adds to the humiliation and profound injustices to which he has been subjected”.