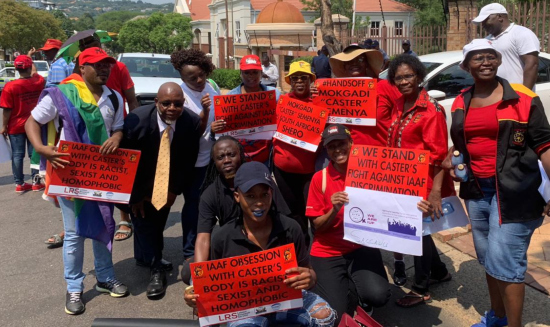 The IUF-affiliated South African Commercial, Catering and Allied Workers Union (SACCAWU) organized a protest together with the Congress of South African Trade Unions (COSATU) and civil society organizations at the Embassy of Switzerland on International Women’s Day. This was also to show our support of the South Africa government position on Caster Semenya.

They handed over a memorandum of their concerns and demands on Caster Semenya’s discrimination case to the Swiss Embassy in South Africa, so that the demands can be raised with the UNHRC.  The IUF welcomes this first UN resolution on the rights of intersex persons and congratulates SACCAWU for its contribution to this success.