Contract workers claiming their rights at Nestlé’s dairy factory in Kabirwala, Pakistan have been punished with the loss of their jobs and jailed by the score on fabricated charges as management seeks to criminalize the union’s struggle in support of permanent jobs for contract workers. The sordid details of Nestlé’s campaign of repression are on this site here.

In what follows below, Muhammad Babar Serwer, who has worked at the plant since 2005, tells his story.

“We were told that we were the contractor’s workers but the initial job interview and safety training were done by Nestle management and all supervision and job assignments were done by the management staff. We never received anything in writing from the contractor. Our only experience with the contractor was that he decided who should go inside the factory when we came for duty. The numbers of workers registered with the contractor were more than double what was required at the factory in each shift, so there was always competition and priority was always given to the relatives and friends of the contractor. This is why I was able to work 6-7 days in some months, sometimes 16-18 days another month. My residence is far from the factory., When I didn’t get work in one shift, I tried to get work in another; sometimes I tried all 3 shifts but found no work. Management sometimes expelled us from the factory in the middle of the shift if the work was finished or the order changed, so that day was not paid.

“I live in a family with my mother, father, two sisters, four younger brothers and grandmother. My father is a railway employee but his income is not enough for us all. The contractor always deducted 3-4 days from our wages. When we asked about the deduction;we were threatened with dismissal. The contractor’s manager always demands a bribe to send us into the factory. When we filed cases in the labour court to make our jobs permanent, management started threatening us and demanding we withdraw the cases.

“On February 24 I was on the second shift (02:30-10:30 PM). At around 09:30 PM, my supervisor called and management handed me over to police. Another worker, Akram Rafiq, was also handed over to police with me. Later we knew that management registered a fake complaint against three workers, including the two of us, telling the police that we entered the factory with arms including, a pistol and knife. It is a joke – with security guards, cameras, scanner and other security arrangement no one can go into the factory like this.

“We reported for duty at 02:30 pm and the report was lodged in the afternoon. The police investigation found the charges false so we were released on bail after two days’ custody [note: bail was set at over USD 500]. We know that this is a kind of management pressure on us to withdraw our cases from the labour court and we were also ready for other similar incidents. We were dismissed, then in June 33 more workers were terminated and we along with those filed a case in the labour court. On July 27 the labour court directed management to take all of us on duty but management refused to accept the court order and one by one the termination of other workers has continued.” 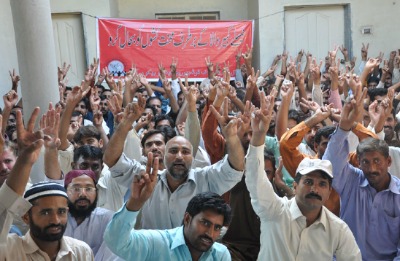 Click here to send a message to Nestlé demanding an end to the criminalization of casual workers fighting for their rights!