On this International Human Rights Day, the IUF joins with all those around the world calling for the full recognition of LGBTI rights as human rights.

The IUF has always been committed to the universal defense of human rights. The right to determine one’s own gender identity and the freedom to love whom one loves are among those fundamental rights.

Article 2 of the Universal Declaration of Human Rights states in the clearest possible terms that, “Everyone is entitled to all the rights and freedoms set forth in this Declaration, without distinction of any kind.”

The Universal Declaration of Human Rights was adopted on 10 December 1948. Every year since then December 10 has served to mark Human Rights Day worldwide. The IUF’s commitment to equality in the workplace and in society took an important step forward on August 27 in connection with the IUF 27th World Congress with a well-attended  first-ever meeting of LGBTI Workers and Allies, who will now constitute a formal group within the IUF structures and be represented on its governing bodies. 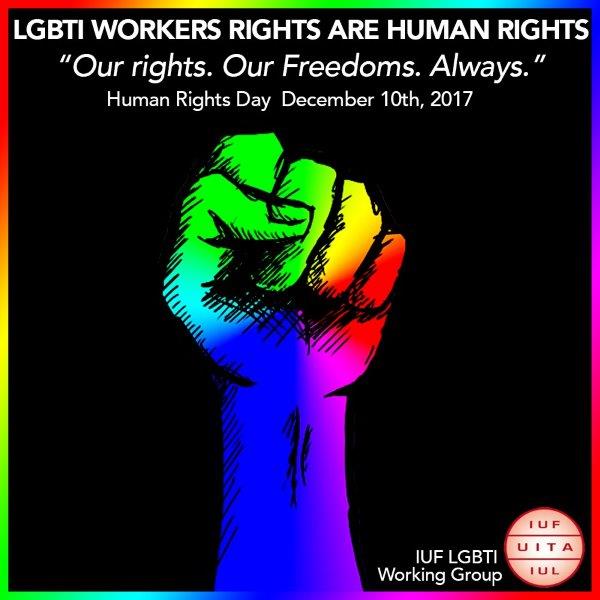 “Today, the IUF calls on affiliated organizations to stand up for the rights of all including the human rights of LGBTI people. Trade unions must join the fight against laws criminalizing homosexuality which pose a serious threat to the fundamental rights of lesbian, gay, bisexual, transgender and intersex individuals.  We need to stand together to demand full and equal human rights for all, at the workplace and in society“, said IUF General Secretary Sue Longley.