Locked out CMP ANZCO workers and their families picketed a McDonalds store in North Palmerston on November 23.

ANZCO is a major supplier to McDonalds.

Over 100 sheep processing workers remain locked out from the CMP Rangitikei plant since October 19 for refusing to accept up to 20% pay cuts, shift changes and reductions in allowances. 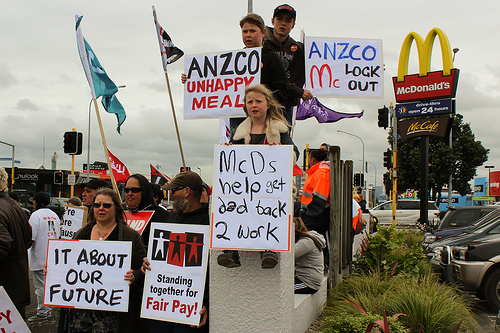 On December 3, further actions organized by supporters took place at McDonalds locations throughout the country.

On December 17 the Locked out Workers Support Group (click here to join the Facebook group) will fundraise outside of McDonalds nationwide to buy presents for the children of locked out ANZCO CMP workers and continue to put pressure on McDonalds.