Hotel workers, members of Unite the Union, took actions on Friday, August 8, to protest against low wages in one of the wealthiest cities in the world (click here for more). 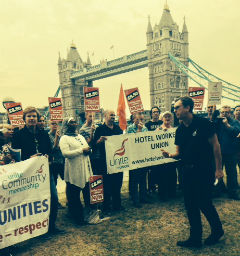 While IUF affiliates have sent solidarity messages to the workers, campaign supporters have sent emails to the Mayor of London asking to deliver the promises he made just before the 2012 Olympic Games, “to take actions to boost pay in the industry” (the petition is available here).

A short film capturing the reality of life on poverty pay in London is available at this link.