Members of the IUF-affiliated National Union of Hotel, Bar and Restaurant Workers Peninsular Malaysia (NUHBRW) at Shangri-La’s Rasa Sayang Resort and Spa have won back their collective agreement and restored collective bargaining rights after a 13-year fight.

In December 2004, Shangri-La Hotels closed its Rasa Sayang Resort in Penang for renovation and reopened as Rasa Sayang Resort and Spa in September 2006. However, Shangri-La claimed that while all of the workers returned to work at the renovated hotel, it was a “new” hotel and the wages and benefits under the existing collective agreement no longer applied.

NUHBRW members launched protest actions against the unilateral termination of the collective agreement and took the case to the Industrial Court. The union won a favourable decision which reaffirmed the union’s collective bargaining rights, but Shangri-La launched a costly legal battle to assert its power to unilaterally impose new terms of employment.

Finally in April 2017, the Federal Court upheld the Industrial Court decision and ordered Shangri-La to restore the terms and conditions of the collective agreement retroactive to 2006. 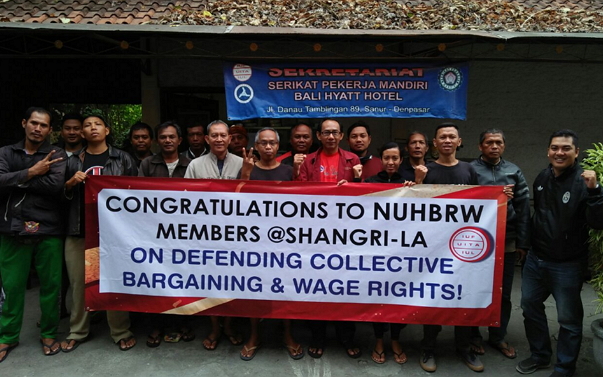