Published: 02/06/2015
The IUF-affiliated Tourism Employees Association of Maldives (TEAM) rallied tourism workers on May 30 in the Maldives capital Male, capping their petition campaign to raise standards in the tourism sector. More than 7,000 workers from 80 resorts signed the petition calling on the government to establish a legal framework for collective bargaining and take measures to improve the situation of the country’s resort workers. 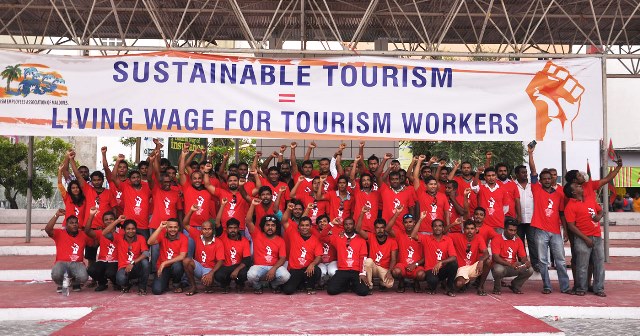 Maldives ratified the core ILO Conventions in 2013 but has yet to pass legislation which would establish a legal framework for the establishment of trade unions, collective bargaining and industrial action. The union is also demanding a living wage of USD 600 for resort workers, equal, fair and transparent distribution of the obligatory service charge, implementation of the President’s pledge to facilitate employee share ownership and an employment quota for local workers, who complain of widespread discrimination in favor of expats.

Tourism is the mainstay of the Maldives economy, but while resort room rates run to USD 2000 per night and more workers earn typically 150-200 monthly. There is no legal minimum wage. Most workers are employed on fixed-term contracts, and the absence of trade union rights makes workers even more vulnerable to employer pressure. TEAM is also demanding reform of the grotesquely misnamed Freedom of Assembly Act, which allows employers to criminalize the smallest gathering of workers.

The petition, which was signed by over half the country’s non-expat resort workers, has been presented to the President, Parliament and relevant ministries.