Marriott workers across Africa have called on the CEO of the world’s largest hotel company to engage directly with the IUF to agree on global measures to combat the sexual harassment which plagues the hospitality industry. Their petition was delivered to the general manager of the Sheraton Tunis by representatives of the IUF African Regional and Strategic Leadership Committees on December 4.

The initiative comes out of an IUF meeting of Marriott union representatives in Conakry, Guinea on March 5, at which participants agreed to publicize the demand and circulate it at Marriott-branded hotels across Africa.

In the meeting with the Sheraton Tunis general manager, IUF representatives emphasized that Marriott can only provide a harassment-free workplace through negotiation with the unions that represent hotel workers. The new ILO Convention 190 makes it clear that collective bargaining is the key to eliminating violence and harassment.

Since 2018, IUF affiliates have been calling on Marriott, as the world’s largest hotel group, to set a global standard for combating sexual harassment in the hospitality sector – read more HERE and HERE. 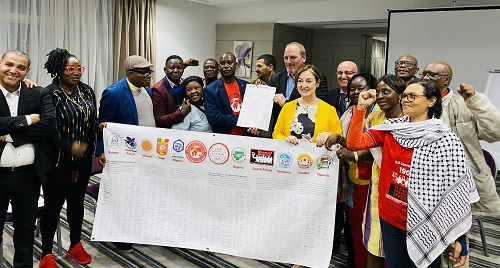