Union members from Marriott hotels in Africa, Asia and the Pacific, Europe and the Americas came together in Geneva on May 29 to voice their demand for global action by the world’s largest hotel group to protect workers from the endemic sexual harassment which plagues the industry. Surveys around the world have indicated that a large majority of hospitality workers – up to 89% in some countries – have experienced sexual harassment on the job in the course of their working lives. The Marriott workers, led by the IUF, took their call for a global agreement directly to two Geneva Marriott hotels and into the United Nations’ International Labour Organization, where worker delegates at this year’s annual ILO Conference are pushing for a global Convention on violence and harassment in the workplace. 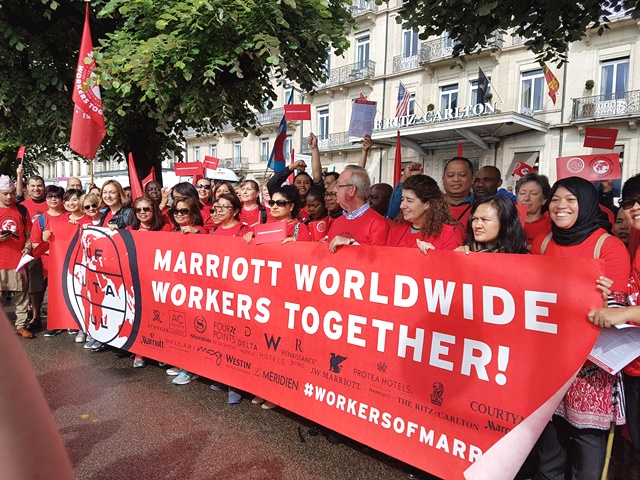 At a packed  meeting at the ILO co-hosted by the IUF, our North American  affiliate Unite Here and the AFL-CIO, long-time Marriott employees told of their personal experiences of sexual harassment and assault by guests, of management’s ‘blame the victim’ mentality and failure to take adequate measures to protect workers, and of the lasting trauma such incidents inflict. Workers also spoke of management efforts to undermine union organizing by pressuring workers to resign their membership and by firing activists and supporters. The meeting, convened to highlight the vital link between sustainable tourism, decent work and gender equality, forcefully underlined the importance of freedom of association for efforts to eliminate sexual harassment at the workplace. Employer action is urgently required, but for this to be effective unions need a secure legal framework in which to organize and negotiate.