On July 20 the national hotel and restaurant workers’ federation, FSPM, held a mass action in Jakarta to demand the reinstatement of 83 union members who were terminated by one of the country’s leading fast food chains, PT Champ Resto Indonesia, for protesting against the lack of health coverage that contributed to the death of a new-born baby.

In November, 2015 the new-born baby of one of the workers at Champ Resto died when essential treatment was refused by the hospital. Workers only then discovered that Champ Resto had failed to register them as employees under the government health insurance scheme. This medical scheme, BPJS, should cover the workers and their families. If Champ Resto had registered its employees in accordance with government regulations, then Alikha could have received the necessary medical treatment and be alive today.

When outraged union members protested in Bandung, demanding that Champ Resto register all workers for family coverage, 83 workers were immediately terminated for speaking out.

The same fast food chain regularly fired pregnant workers, leading to a campaign supported by FSPM and IUF last year that saw the reinstatement of a woman worker and changes in the ‘no pregnancy’ policy.

In its weekly protest actions the IUF-affiliated FSPM is demanding that Champ Resto reinstate the 83 unfairly terminated workers, respect freedom of association and freedom of speech, and register all workers under the health insurance scheme with family coverage. 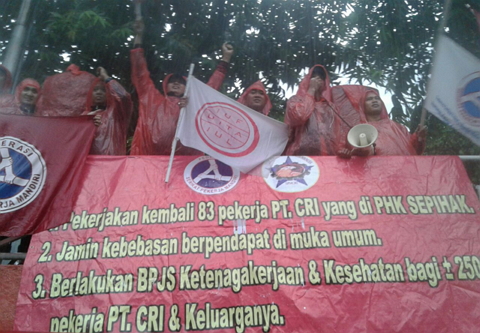