The 226 workers who have been locked out of their jobs at Kellogg’s in Memphis since October were honoured and supported as part of Martin Luther King Day events in Memphis on January 20.

This year’s celebration of Martin Luther King Day featured David Durkee, President of the Bakery, Confectionery, Tobacco Workers and Grain Millers International Union (BCTGM) as special guest speaker, where he evoked the historic battle for equality and justice led by Dr. King and reflected on the lockout of the 226 workers at the Kellogg cereal factory.

The civil rights leader and champion of economic justice, Martin Luther King, was assassinated in April 1968 in Memphis, where he had gone to support a sanitation workers’ strike.

The 226 BCTGM members at Kellogg in Memphis have been locked out since October 22 for refusing to accept a plan to hire all new workers as casuals with lower pay and benefits.

The Memphis labour, social and religious communities have provided valuable support for the workers and their families since the lockout began. 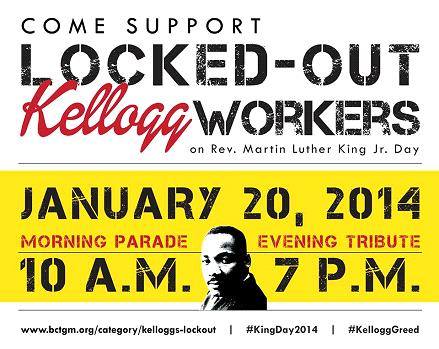