Home/News/McDonald’s Italy: no room for unions on the menu

McDonald’s Italy workers and their unions are fighting the company’s dismissal of 4 union workers following the closure of its flagship restaurant in Milan’s city center. The conflict began on July 19 when managers told employees on duty that the restaurant would be closing the next day. Union representatives were not given any previous information.

On July 20, workers were called to a meeting in a hotel and given transfer letters to one of the company’s ten directly-owned restaurants. Out of 50 workers, 46 were transferred to other restaurants, but on a temporary basis or to lower positions.

McDonald’s has refused to find a solution for 4 of the 50: two union shop stewards and two union members with 5 children each. In response to the company’s refusal to reinstate these workers, the IUF-affiliated Italian unions FILCAMS-CGIL, FISASCAT-CISL and UILTuCS-UIL held a strike at directly-owned McDonald’s restaurants in Milan on July 31. 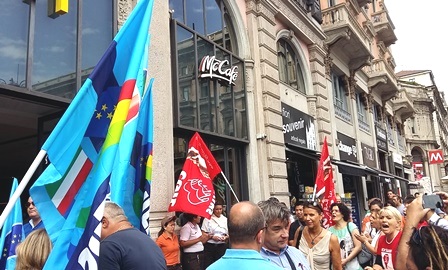