Mondelez has for the second time rejected an offer from the US government to mediate a dispute with the IUF involving allegations of serious human rights abuses. Last year, the company rejected an offer to mediate disputes over union-busting in Egypt and Tunisia.  Mondelez has now again refused a mediation offer from the US government’s National Contact Point (NCP) for the OECD Guidelines on Multinational Enterprises, this time flowing from the abusive use of casual work in its Pakistan Cadbury operation.

Business is booming at the factory, which has added new productive capacity, but for over 2 years the company continues to reject all efforts by the union to negotiate a transition to permanent, direct employment for any of the more than 500 workers regularly employed on a purely casual basis. At this prosperous factory there are only 49 permanent workers, with the right to membership in the union – all others, including those in ‘core’ manufacturing positions, are employed on inferior terms and conditions and are denied the rights and entitlements of the small number of permanent workers.

In December 2013, the IUF filed a complaint with the NCP, alleging numerous violations by Mondelez in Pakistan of the Guideline’s chapters on employment and industrial relations, human rights, disclosure and general policies. The US NCP, which unlike other NCPs does not determine whether the company is breaching the Guidelines, accepted the complaint as legitimate and offered mediation – a voluntary process with no judicial consequences from which either party is free to walk away at any time. Mondelez said no. The evasive, incoherent reasons they give for that rejection are on the NCP’s website, together with the detailed documentation of the complaint by the IUF, here. Talks between the IUF and Mondelez to address these abuses would shine a light on local management’s practices, but Mondelez rejects this, just as they refuse to address any of the substantive issues that the IUF raised in its complaint, and around which the union continues to campaign, for nothing has been resolved at the factory. The company’s refusal to agree to talks constitutes a further violation of the Guidelines, whose human rights chapter mandates a process of “human rights due diligence” to address and correct, together with affected parties, adverse human rights impacts resulting directly or indirectly from their operations.

What is Mondelez afraid might emerge from examining the situation at Cadbury Pakistan? 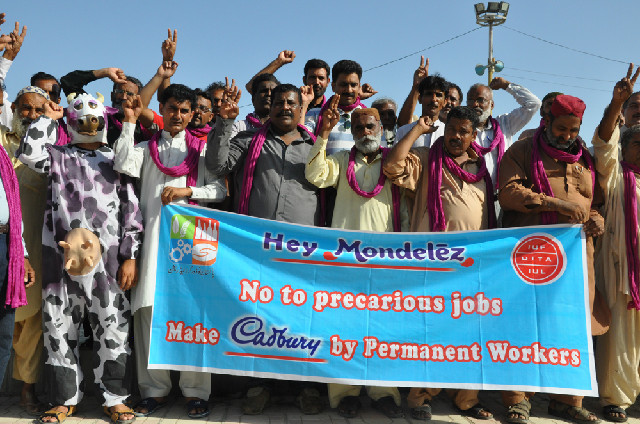 Our affiliate continues to demand negotiations on the regularization of these abused contract workers on whose daily labour Mondelez profits depend. The campaign will continue for as long as it takes.