Published: 12/04/2017
The IUF-affiliated Mayson Workers’ Union has ended the strike launched on March 9 with a return to work beginning April 10 under the terms of an agreement brokered by the chairperson of the Parliamentary Committee on Local and Overseas Employment. The union took industrial action in response to the unilateral announcement of 184 layoffs, the majority of them affecting union members and officers.

Workers continued to strike following the company’s decision to contest an April 1 arbitration tribunal decision calling for reinstatement. In the course of the strike, workers from nearby food processing and garment factories marched to the Mayson workers’ picket to show their support. 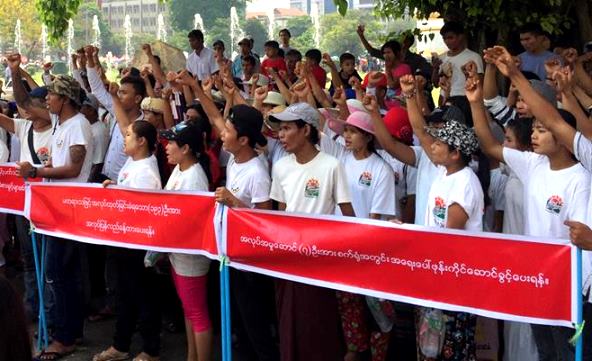 All workers wanting to return to work have been reinstated and are back on the job; negotiations concerning 4 union leaders who have still not been allowed to return to work are continuing as part of the settlement. The union has expressed its appreciation for the international support it received during the struggle and is prepared to relaunch protest actions if the remaining issues are not resolved.