Protest actions were launched by HLOB, the IUF-affiliated hotel and tourism workers’ union federation in the Bagan, Myanmar, to denounce rights violations at The Hotel Tharabar Gate. On August 24 management terminated 12 workers including the union chairperson, two union executive officers and seven union members, claiming it was due to economic reasons. However, management only informed the union about the job cuts the day before (August 23) and already had termination letters prepared while pretending to engage in negotiations. Union members protested that management is using a downturn in occupancy to attack the union, undermining the right to freedom of association and collective bargaining. Union members from seven hotels in Bagan joined the protest action calling for the reinstatement of union leaders and members.

Located in the Bagan Archaeological Zone, the hotel is next to one of Bagan’s most important archaeological sites, Tharabar Gate. “HLOB members play a vital role in promoting responsible, ethical and sustainable tourism in Bagan, yet face an irresponsible and unethical management that is undermining workers’ rights and livelihoods,” said the IUF Asia/Pacific Regional Secretary, Hidayat Greenfield. The IUF has written to the local tourism industry bodies and authorities calling for the unfairly terminated workers to be reinstated and for management to engage in good faith negotiations with the union. In 2015, HLOB union leaders were terminated at another luxury resort, Bagan Hotel River View. After an international campaign and an ILO complaint filed against the Myanmar government, the dismissed union leaders were reinstated. The IUF will launch a similar campaign for the reinstatement of members at The Hotel Tharabar Gate. 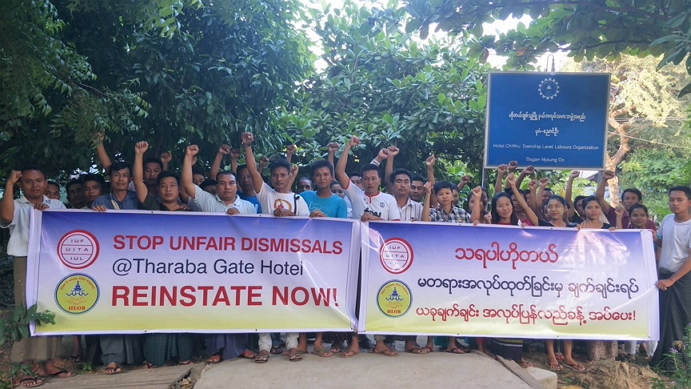